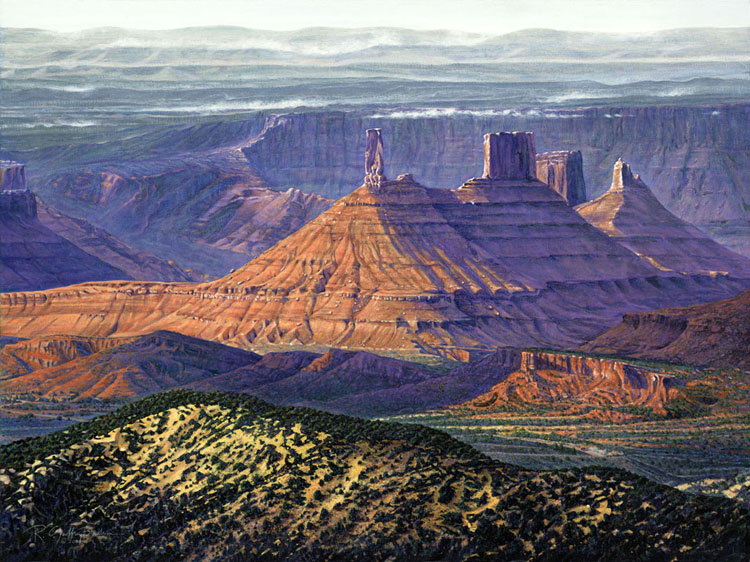 "This scene is among my favorite desert paintings. This slice of the desert has particular significance for me as I spent several years looking at it during my mining years. The present painting is actually the updated version of the "Castle Tower" desert oil painting originally completed in 2006. It is the “right half” of an almost diptych (painting in two-parts) of a vista of Castle Valley, Utah (east of Moab) . It is an almost-diptych because both “halves” are viewed from slightly different elevations and the right half slightly overlaps the left. It was revised because a 5/8” x 5/8” divot was made in the sky of "Round Mountain" by a careless gallery worker scraping off the paint (many glazed layers) all the way down to the raw canvas! So, to rehab the painting, I had to build up the hole to the level of the surrounding paint and then re-paint the entire sky. Since this is an almost-diptych I also had to repaint the sky of the “right-half” "Castle Tower" painting as well!! The reason I couldn’t just patch the hole was because it was down to raw canvas and because the glazes couldn’t be exactly duplicated so would never quite match—unacceptable. an opaque painted surface looks quite different than a glazed surface. Unfortunately or fortunately as it turned out, an opaque paint was what was needed to fix the hole and re-do the skies for the two paintings. So I mixed up a large batch of thick paint and redid both skies in a 90 minute session. The new skies were much brighter and of course, opaque, so that necessitated certain changes in the back and mid-ground as well. Studying the problem I decided to punch-up the drama. I broke up the skyline with clouds and added low clouds-ground mists to the mid-ground. So, now the original paintings of "Round Mountain" and "Castle Tower" no longer exist. They have morphed into "Round Mountain 2.0" and "Castle Tower 2.0". The original images exist only as pigment prints (giclées). And, I am very happy with the new versions!! It changed the mood of the paintings and reminds me of a time living in a trailer on the top of the cliff overlooking Castle Valley (and Castle Tower and Round Mountain) drilling for uranium. I was perched on our 25’ high drill rig looking out into Castle Valley watching a thunderstorm approach. What a fantastic scene! One of many I saw from our claims on Wilson Mesa east of Moab, Utah."