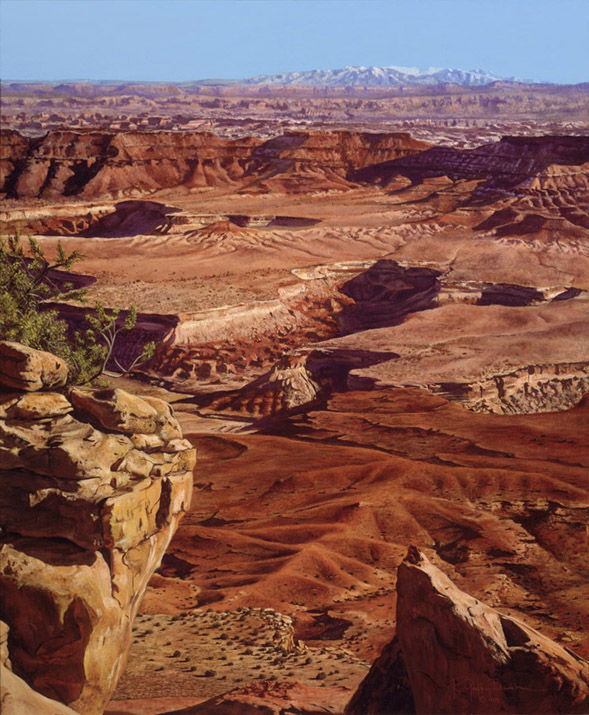 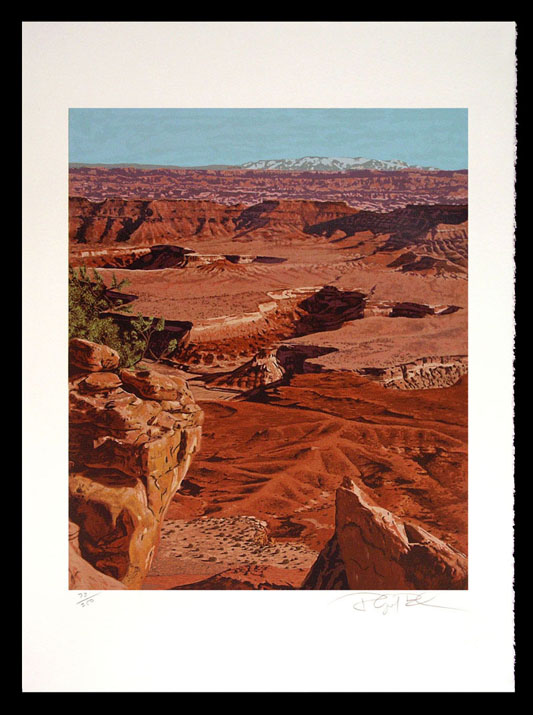 "This painting was the first in a series of desert landscapes I created during a period of personal involvement with mineral exploration and mining in Southeastern Utah, near Moab. "Desert Canyons" is a composite of geological formations and vistas in this area. The limited edition serigraph entitled "Desert Canyons" is a 28-color hand done silk screen reproduction (serigraph) of the original oil painting of the same name (shown above).

"Desert Canyons" began as a much different painting than is now visible. In fact, "Desert Canyons" evolved from an earlier work depicting five armed men, in "hot pursuit," riding through a forest. This original painting, entitled "The Posse," was completed in 1972 and displayed at the Jailhouse Gallery in Taos, New Mexico. After a few months I decided that the posse would look more natural riding through a desert than through a forest, so I asked the gallery to return the painting so I could change the background. One by one members of the Posse began disappearing under a coat of paint until, at last, there was only the Sheriff riding along the edge of a cliff, rifle in hand. Finally, he too was painted over and thus the painting, "Desert Canyons" was created. (In just the right light, the posse was still visible under the desert, buried for all time like the cowboys of the old west).

This final version of the "Desert Canyons" oil painting was completed in 1974 and was part of the Robert Norman collection. Mr. Norman is a geologist and General Manager of the Minerals Exploration Division of Buttes Gas and Oil Co., Moab, Utah. Interestingly, this work and the paintings of this period that followed are so geologically accurate that all but one are (or were originally) owned by geologists or mining companies.  The Desert Canyons painting was destroyed in a fire at Robert Norman's home.

The importance of this work is that it began the Artist's "Red Rock Landscape Period." The original painting was destroyed in a fire many years ago. Only the serigraphs remain."