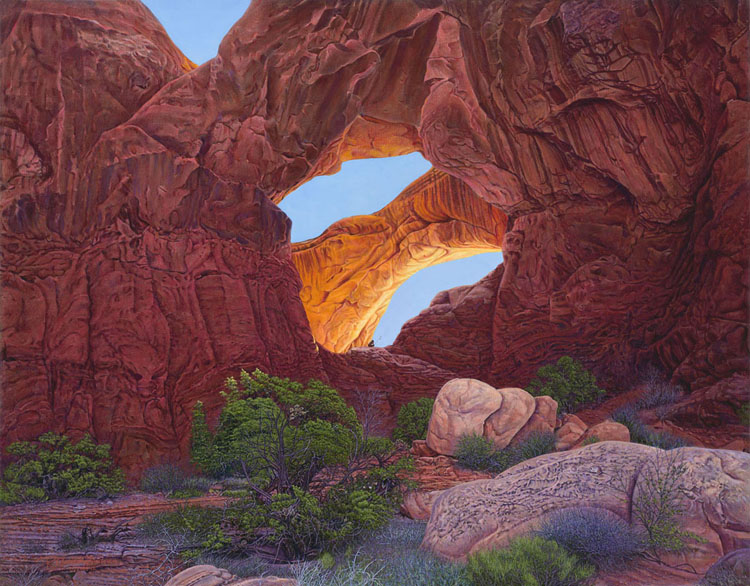 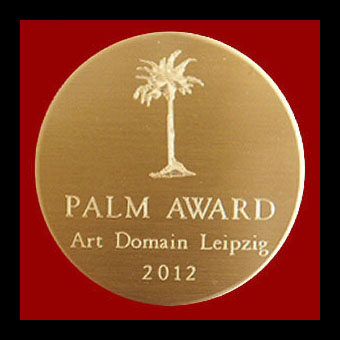 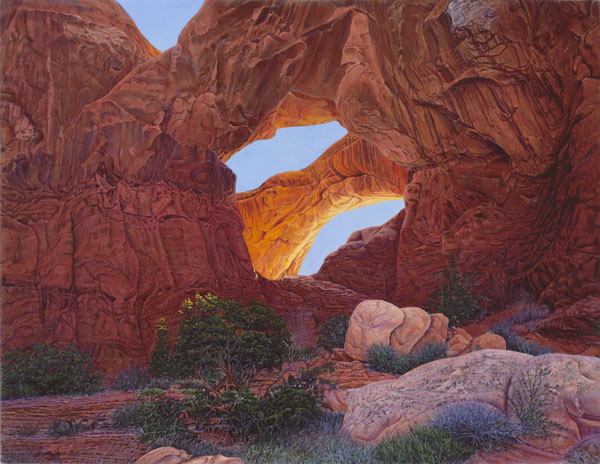 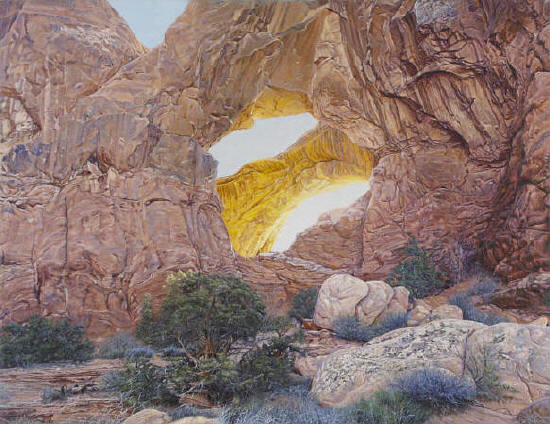 
FYI:  All three versions are still available as limited editions pigment prints (or giclées, if you prefer).  Because this is a large painting to begin with, we can produce gigantic wall-filling prints at high resolution! Contact: rgeoffrey@rgeoffrey.com for more information.

"How Indian Summer evolved from Double Arch and Double Arch Dawn: We got up well before dawn and drove to Arches National Park near Moab, Utah and hiked up to Double Arch. I wanted to be in position to photograph the sun rise hitting Double Arch. While setting up my tripod and focusing in on the arch in the rapidly increasing light, I noticed through my camera's viewfinder what looked like something moving in the arch. I zoomed in to see a guy in white shorts and suspenders, no shirt, climbing up through the arch. At least that's what I thought he was doing at the time. He was bent over, rear-end facing my camera right in the middle of the arch. I waited a few minutes and still, he didn't move. So I moved my camera to a different spot to try to get him out of my shot or at least in a less obvious position. When I moved, he moved keeping his butt in the frame. This went on for 20 minutes so. There was absolutely no question, this jerk was mooning me, intentionally goofing up my shot. In the earlier versions I almost painted this idiot into my painting, but decided against it. Finally, in 2011-12, I decided to paint this "Mooning Buffoon" into my scene changing him into an Indian hunter. It worked great! Thanks Bozo! I also added significant detail and some other wildlife to the scene. The original version entitled Double Arch (below) took 462+ hours to paint in 2005. In 2007, I decided to revise the piece and did an additional 150+- hours to get the 2007 Double Arch Dawn version (and an additional 150 +- hours for this last and final version). Truly, a study in masochism."