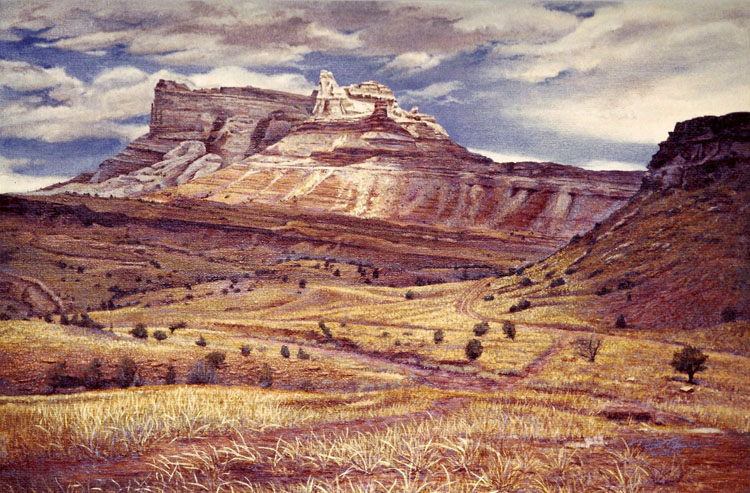 "This was another commission I painted for the legendary adventurer, balloonist and mining magnate, Maxie Anderson. The first commission was a winter scene entitled "Bryce Canyon". Maxie was the Owner and CEO of Rancher's Exploration and Development Corporation of Albuquerque, New Mexico. I met Maxie through his chief geologist Dave Fitch. I had proposed a parcel of mining claims to Ranchers and Dave was sent to check out the geology. Actually, Dave and I had several such encounters and on one of these, having found out that I also was an artist, he mentioned that Maxie had an amazing art collection at the Ranchers headquarters. Dave arranged for me to meet Maxie who was sufficiently impressed to commission this and another painting.  Subsequently, Maxie purchased "Red Canyons" and had me do this commission of one of his uranium properties at Temple Mountain in the Southeastern Utah desert.

Maxie was best known for being the leader of the three man team who were first to cross the Atlantic Ocean in a balloon (the Double Eagle II in 1978). He had previously attempted a crossing and crashed in the ocean. ( I also did a painting of his crashing balloon, Double Eagle). The Bryce Canyon piece was created in 1977, before Maxie made his first attempt at the crossing. He was an amazing man and I really enjoyed our conversations about art and mining. Tragically, Maxie and his team mate Don Ida were killed in a balloon race in Europe in 1983. Dave Fitch and I became good friends bumping around the Moab outback together looking at uranium properties and have continued our friendship to this day. He and my late and very dear friend Bob Norman of Moab (also a geologist and General Manager of Buttes Gas and Oil) were the inspiration for my insistence on geological accuracy in all my red rock paintings. Interestingly, I never did get Maxie to buy any of my uranium properties, only my art. Same thing with Bob: yes on the art, no on the uranium property. "