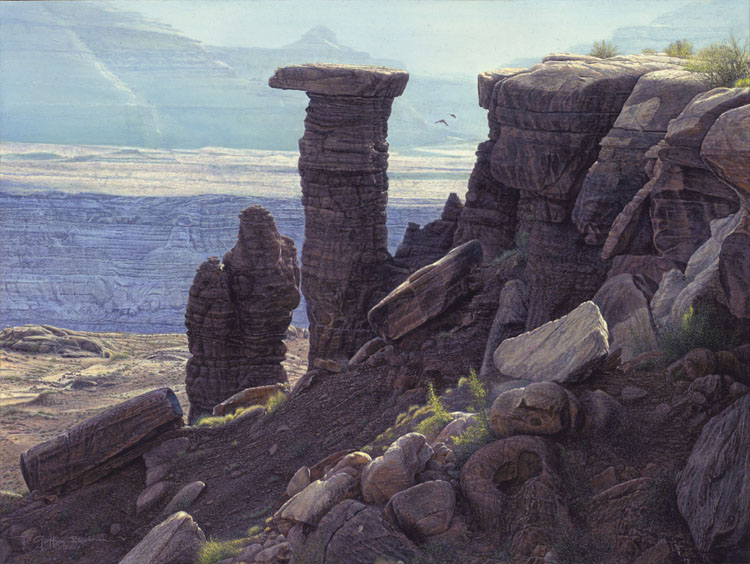 "Two Hawks, an admittedly terrible title, (I'll change it if/when I think of something better) is a morning scene from just off the White Rim trail- a 103 mile dirt road that runs under Dead Horse Point west of Moab, Utah. I have done a number of scenes along this road. It has amazingly diverse geological structures and the colors are mind blowing! This particular formation is almost impossible to spot from the road, indeed the only visibly distinguishable part is the very top of the pillar and if you don't happen to see it at exactly the right moment, it is gone before you know it. This painting took me a brain-numbing 1673 hours to paint. I could have done the Sistine Chapel… so why you might wonder did it take so bloody long?! Well, for one thing, I learned (at about a 1000 hours in ) that I had cataracts in both eyes that radically affected my ability to see blues and purples. Big Shock. I had them removed in July of 2016. Then I saw my painting for the first time. I had another BIG SHOCK. The colors were so far off from what I thought I was painting, I had to make significant adjustments to much of the painting. Also, more importantly, I kept discovering/creating new spaces in the painting that I could go into and explore. It was absolutely fascinating. So, into my painting I went. I literally spent my time creating space to go into. The more time I spent, the more space I created. It's been an strange, lonely, amazing, even metaphysical experience. Every day for months I thought I'd be finishing the next day only to be confounded by a new discovery that I just had to explore. I had even painted the 2016 date on the piece but had to paint that out as I ended up well into 2017 before I finally called it done. Boy, talk about OCD… Think about it, I've looked at this image, basically 1/25 if a second, for nearly 1700 hours and am STILL discovering amazing things in the scene...Hmmm..."